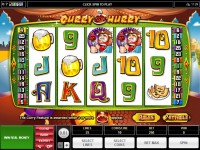 Platinum Play Casino continues to stay at the top with the introduction of two new video slot games this month. Started in 2004, Platinum Play has become famous for combining a great casino experience with lucrative bonuses and superb games created by Microgaming.

The first of the two new games is called Mad Dash. It’s a madcap race between a frog, fox, and rabbit, who are all dashing towards huge winnings. The game features 5 reels, 20 paylines, and the chance to catch a 160,000 coin jackpot.

The second game is called Reel Gems. The reels sparkle with precious stones and gems. This five-reel game has no paylines, instead there are 243 different ways to win! 40,000 is the highest payout, with a chance to win triple that during the free spins feature.

Platinum Play is the perfect place to try out Mad Dash, Reel Gems, or any of the other 400 games available.