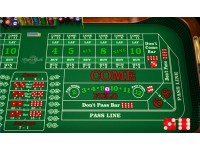 Microgaming has launched Joy of Six, a simple 30-payline slot with a great free spins round.

The background of the reels is a craps table, and the symbols include the die, the Joy of Six logo, the croupier and the casino chips.

The wild is the die, which substitutes for all symbols except the scatter. It doubles payouts when substituting in a winning combination.

The scatter is the croupier, two or more of which awards scatter payouts.

Three or more scatters awards 15 free spins. The key in this round is the die symbol. When it appears in a winning combination, the croupier rolls two dice. The game focuses on one of the dice, and all wins involving that die have the payouts multiplied by the number on the die.

Joy of Six also has Microgaming’s double up game, where players try to double or quadruple their payout.